Today the US Patent & Trademark Office published two patent updates from Apple. The first covers a future interactive vehicle heads-up display that a user could use in-air gestures to control various interfaces, including games, in autonomous or semi-autonomous vehicles. The second patent relates to the use of Virtual Paper in AR/VR environments, giving virtual paper many dimensions beyond real world paper.

Aspects of Apple’s invention involve projecting an interactive scene onto a surface from a projecting object. In one particular embodiment, the interactive scene is projected from a vehicle and may be utilized by the vehicle to provide a scene or image that a user may interact with through various gestures detected by the system.

In addition, control over some aspects of the vehicle (such as unlocking of doors, starting of the motor, etc.) may be controlled through the interactive scene and the detected gestures of the users.

You could review our original 2018 patent report here that was first discovered in Europe for more graphics and details. Apple patent was granted in September 2021 under number 11,117,535. Apple’s updated patent published today interestingly scraps the original 23 patent claims for a single patent claim noted below:

New Patent Claim #1: “A system for projecting an image onto a surface near a vehicle, the system comprising: a presence detector that detects the presence of a user within a threshold distance of a projection system integrated with a vehicle, the presence detector comprising a proximity sensor and a recognition system to determine an identity of the detected user; a projection controller in communication with the presence detector to receive the determined identity of the detected user; and an image projector in communication with the projection controller, wherein the projection controller transmits one or more instructions to the image projector to display an interactive image onto the surface within a vicinity of the vehicle based at least on the identity of the detected user.”

A Driver (or passenger) using gestures to interact with the heads-up display on a windshield or passenger window was further elaborated in a 2021 granted patent that we covered here.

Patently Apple covered this invention in a May 2022 report titled “Apple has Won a Patent relating to Virtual Paper that will be used in Augmented and Virtual Reality Environments.” Apple’s patent relates to the future use of Virtual Paper on devices that will be able to crumple, flip, fold, bend while keeping the graphics intact in varying positions as the virtual paper changes angles and perspectives. Virtual paper could include mixed reality content in 2D, 3D and animation where the image could be constantly shifting depending on a particular state that it’s in. This is pretty cool stuff that’s now in-the-works.

Apple’s patent FIG. 4B illustrates the backside of the virtual paper with the chicken, the bounded surface (#405) appears to be translucent or semitransparent, such that we can see the outline of a blurred chicken image with just the tip of the beak present on the far right of the image to show you that graphics are following the movement of the virtual paper.

The patent then goes 10 miles deep into the lighting, rasterized images, spheres, pixel depths that could lose the average reader. 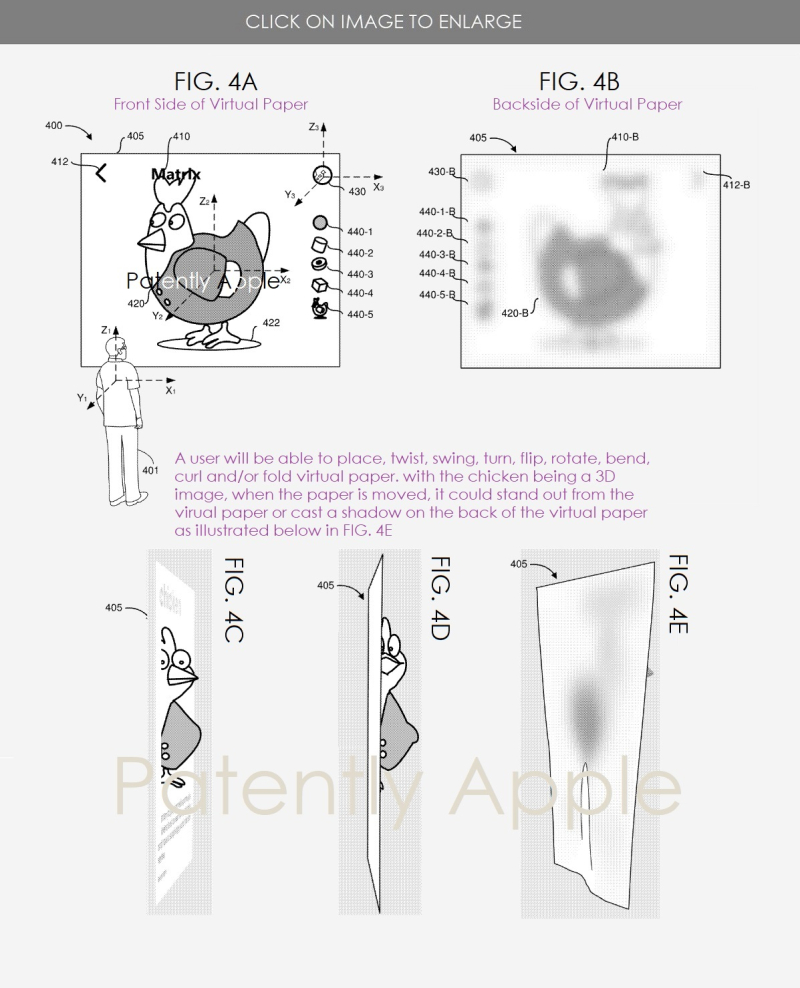 Today’s patent update adds 20 new patent claims to better protect the patent from competitors and patent trolls. Below are just 2 of the 20 new claims:

You could review our May 2022 granted patent report for more details and graphics here and/or review Apple’s updated patent filing 20220245913 to review the full patent and the remaining 18 new patent claims here.